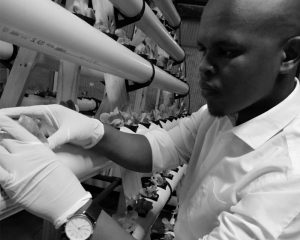 I grew up in Ixopo on the south coast of KwaZulu-Natal and am currently studying micro and cell biology at the University of KZN. The idea for my business started when we were doing a practical in class. We were testing the effects of nutrients on plants and I was intrigued that this could be done without the use of soil so I started researching hydroponics.

Raizcorp’s finance director, Colin Kapeluschnik, taught the semi-finalists a lot on the finance side and I have improved amazingly on this.

I started by growing vegetables but the market wasn’t really good so I have been researching how to grow special food using hydroponics. I have been growing strawberries and other berries. I’m also introducing bell peppers which is a whole new thing in hydroponics (I’m not ready to share my secrets yet). Because I am at a university with great minds, I have consulted with lecturers about making hydroponics organic and cost efficient (conventional hydroponics make use of chemical fertilisers). I was told that this would take time to achieve and am working with a lecturer to help me make the project more scientific and agricultural. Right now we are working on how to use algae as a fertiliser instead of chemicals. Algae is cost effective and very nutritious so we are really aiming to be ahead of the rest.

I was very impressed; it was something I had never seen before so I entered the competition the following year.

I attended the ENGEN Pitch & Polish programme in Durban as a workshop delegate. I was very impressed; it was something I had never seen before so I entered the competition the following year. I made it to the semi-finals and, on our last day of training at Raizcorp’s offices in Sandton, Allon Raiz asked me what I was doing differently. When I told him, he said my idea was still immature and that I didn’t have a unique selling proposition. He said that when people became more familiar with the concept of hydroponics, I would just be another guy who does it. That hurt me a lot but now I know he was telling the truth and that I need to be different. It’s one of the main reasons I am researching the organic side and trying to grow new and different products.

Raizcorp’s finance director, Colin Kapeluschnik, taught the semi-finalists a lot on the finance side and I have improved amazingly on this. He’s such a great guy and he really helped. He gave us a whole six-month course in three days.

Being an entrepreneur takes a lot of patience and discipline

Being an entrepreneur takes a lot of patience and discipline. It’s not an overnight thing so you need to be obsessed rather than passionate because passion dies.

I am so grateful to Engen and Nedbank for sponsoring Pitch & Polish and thankful for the all the teaching and the opportunity. I don’t think I would be at this point if it wasn’t for Raizcorp and ENGEN Pitch & Polish.